Submenu on the topic Projects

You are here:  > Projects > Xenia Ohmer

Pragmatics studies how humans reason about the context and each other's intentions to enrich the literal meanings of utterances. While pragmatic reasoning is important for flexible and efficient language use it has been argued to also play an important role in early language learning. Amongst others, pragmatics offers a possible explanation for an important word learning bias, the mutual exclusivity (ME) bias. The ME bias describes children's tendency to avoid assigning a second label to an object that already has a label. It allows for fast language learning in humans as it helps to infer new word meanings in ambiguous contexts. Neural networks, if anything, have an anti-ME bias given a novel object they tend to assign a familiar label. Building neural networks with an ME bias is not only important for word learning but categorization in general.

So far we have developed a new computational model of learning in pragmatic agents. The model extends a prominent model of pragmatics, the Rational Speech Act (RSA) model, with a learning mechanism. Our agents learn explicit semantic representations in form of a matrix mapping words to referents. We can show that pragmatic inference influences the learning process such that they develop an ME bias. Importantly, the model's predictions align well with empirical findings on the relation between developmental change and bias strength. In short, we provide a computational account of the ME bias under a pragmatic perspective on word learning.
In future work we would like to transform our agent model into a neural network model. This allows us to: 1) investigate the model's behavior in more complex scenarios, 2) possibly integrate ME into neural networks, and 3) build on top of recent language emergence research working with rather basic forms of pragmatic reasoning. 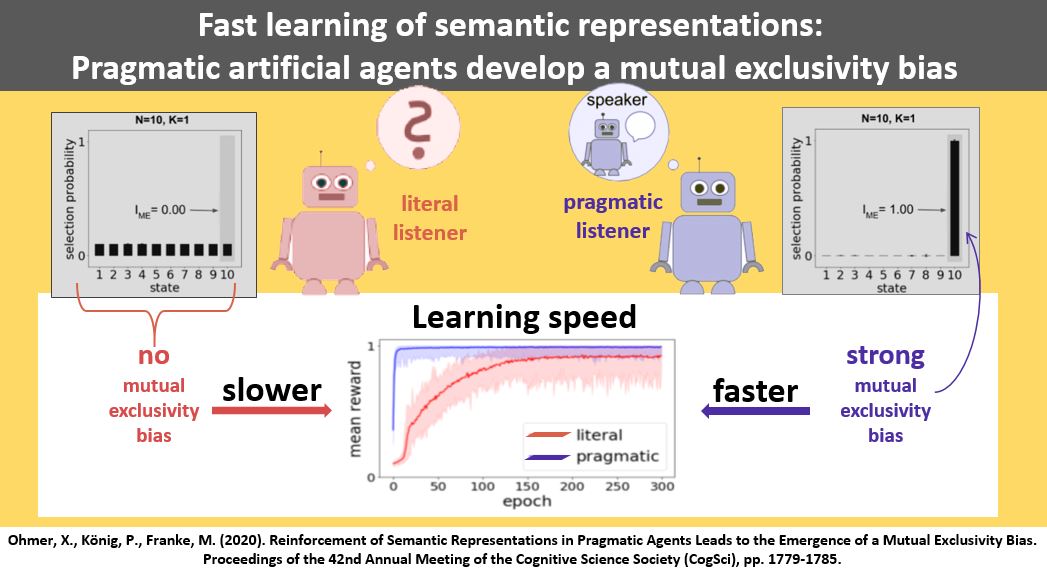 Ohmer, X., Marino, M., König, P., & Franke, M. (2021). Why and how to study the impact of perception on emergent language in artificial agents. Proceedings of the 43rd Annual Meeting of the Cognitive Science Society (CogSci), 1139-1145.
Paper and code